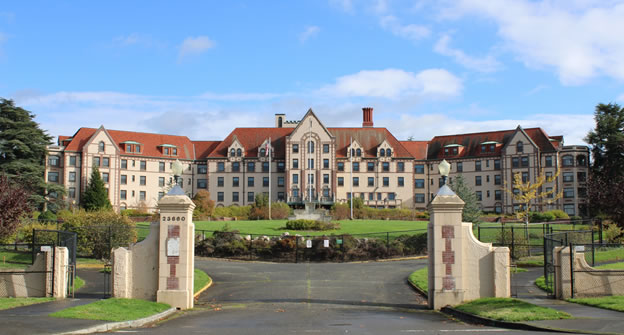 The future of the Landmark on the Sound remains up in the air, city officials say.
Gianna Campos/THUNDERWORD

The future of the Landmark on the Sound, a 94-year-old building located west of Highline, remains uncertain.

From 1926 through 2006, the 27-acre property, then known as The Masonic Home of Washington, served as an assisted living home of the Freemason community of western Washington.

In 2006, assisted living operations were halted and the property operated as an event center under its current “Landmark” name. It continued hosting private events and weddings until 2013, when the Masons Organization put the property up for sale.

The property is now owned by Zenith Properties LLC.

Susan Cezar, the chief strategic officer for the City of Des Moines, said that Zenith Properties LLC has yet to publicly announce their plans for the property.

Cezar said that while there were multiple initial attempts to buy the property, complications in the building’s structure hindered any progress.

“Prior to the sale of the property, there had been around six  or seven previous contracts, none of which were completed due to the cost of rehabilitation of the building,” Cezar said.

An immediate obstruction that Zenith Properties faces is the building’s seismic integrity, which Cezar says is not up to city code. The Landmark on the Sound will also require work on its electrical and plumbing components.

“Unfortunately, the building does not meet current safety codes,” Cezar said, “and cannot be occupied without substantial upgrades and renovations.”

Cezar says that the role of the city of Des Moines is to make sure the building is up to code.

“The property is in private ownership, and the city’s authority related to the property is to assure proper codes are followed in any actions taken,” Cezar said.

The Landmark on the Sound was designed by an architectural firm  Heath, Gove, & Bell, which is also responsible for the unique design of Tacoma’s Stadium High School, which is now a historic landmark.

The Landmark on the Sound, however, does not share its sibling’s honor.

“It is not currently listed as a King County, State or National landmark,” said Cezar.

Without such a designation, the possibility of demolition cannot be ruled out.

“As part of the sale last year, the Masons submitted an application for a demolition permit,” Cezar said. “The application was given an initial review, and a letter requesting additional information was sent to the applicant by the city in August 2019.”

This “additional Information” that was ask for involved whether the new owner planned to go ahead with the demolition permit application. On Sept. 1, 2020, the application was moved into the name of Zenith Properties LLC.

“The resubmitted information has not yet been reviewed by the city,” said Cezar. “Once the application contains sufficient information, one of the reviews will be an environmental review under the State Environmental Policy Act.”

Zenith Properties did not respond to requests for comment.