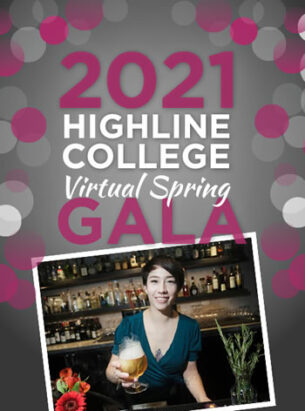 The Highline College Foundation’s annual gala will be held virtually for the first time this April.

A nonprofit organization of the college, the Foundation has traditionally held the annual fundraising event at the Cedarbrook Lodge in SeaTac. Last year, in light of the emerging COVID-19 pandemic, it had to be cancelled on short notice.

“We were actually one of the first events to cancel,” said Josh Gerstman, executive director of the Foundation. “About a week after we made the decision to cancel, the whole world cancelled.”

But Gerstman said that this year, the Foundation was committed to making the event happen.

“We knew that we would do a gala this year regardless, whether we could do it in-person or in a virtual format,” he said. “We were not skipping another year.”

By late fall of last year, the decision had been made to move ahead with plans to hold the gala virtually. Since then the Foundation has been working to establish what that virtual format would look like.

One of their top priorities in doing so, Gerstman said, was simplicity.

To achieve this, the foundation is using OneCause, a fundraising event software platform that Gerstman says will allow attending the gala to be as seamless an experience as possible.

“We very consciously wanted to make it so that people could stay on one screen, and working with OneCause enables us to do that,” he said.

The virtual gala will take place April 29 at 7 p.m. Its programming hasn’t been fully decided on as of yet, but the Foundation plans to host both a live and silent auction, in addition to speaker presentations.

General admission for the event is priced at $25 a seat, and will include what the Foundation is calling one of its “Gala in a Box” packages.

“As part of your registration, if you’re local, we will be distributing these Gala in a Box boxes the day before and the morning of the actual gala,” said Kevin Morin, chair of the Foundation’s Gala Committee who have led the event’s planning. “Everyone who is registered can drive up and pick up their Gala in a Box.”

In these boxes, Morin said, will be a bottle of red wine, a stemless wine glass with the Thunderbird logo, as well as several other promotional items and “sweet treats.” The packages will be distributed at a drive-through event on Highline’s campus on April 28 and the morning of April 29.

“The whole idea is that [attendees] get to have something that they’re sharing with everybody else who is registered for the event, and they feel connected to the evening,” Gertsman said. “We should say, this is not a student-facing event. Everybody who participates has to be over 21 in order to get that bottle of wine.”

Also on offer as part of the event is the gala’s pre-party VIP Experience: For $75 (including the $25 admission fee), the Foundation will be hosting a specialty cocktail-crafting event led by Seattle bartender Cristina Buenaventura.

“We wanted to provide a premium experience for those patrons and donors who would be interested in a little bit more,” Morin said. “Those VIP attendees will be invited to craft their own cocktail in real time as Cristina, the bartender, walks us through how to craft a special cocktail created for this event.”

In addition to the “Gala in a Box” package, VIP patrons will receive a separate package containing the ingredients for the cocktail they will be making. Morin said the VIP event will be very limited, however, and encouraged anyone interested to register as soon as possible to secure their seat.

Registration is currently open for general admission to the gala and the VIP Experience, and is available through the Foundation website. The deadline for registration is April 23.

With its first major virtual event approaching, Gerstman said the Foundation’s hope is that it can recreate the experience of a live community event despite the inability to gather in person and celebrate.

“We want people who sign up for this event to feel like they’ve participated in a live event that was worth their time, and that they were able to connect to Highline College,” he said. “We want them to have that experience of being there on April 29 at 7 o’clock and knowing that they were a part of something special.”