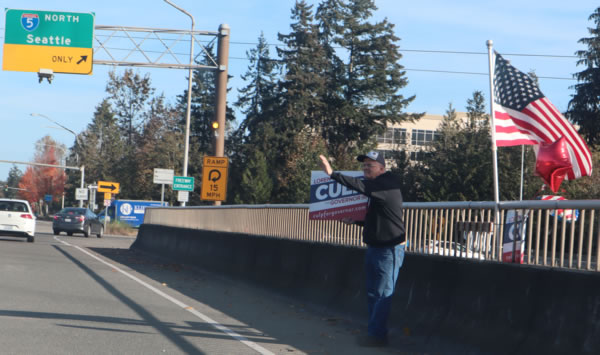 Highline students and others around the community had mixed reactions to Tuesday’s election results.

Some said they hoped former Vice President Joe Biden would pull out a win, while others didn’t think who wins the presidency would make much difference in their lives.

Some Highline students said that they were happy that Jay Inslee was re-elected as governor. Inslee defeated Loren Culp, police chief of Republic, Wash., with roughly 60 percent of the vote.

“I feel good about Jay Inslee winning. I feel like he’s done a lot of good for us and truly does have everyone’s best interest at heart,” said Myla Mbugua, second-year Highline student and social work major.

Others say they have doubts based on Inslee’s past terms.

“I heard he was rated the worst governor when it comes to taxes. I feel that lots of people don’t like him and I feel that it should be time to have a new person run the state,” said Jackie Acosta, second-year Highline student and education major.

“I’m totally impressed that Culp got a healthy turnout for a guy who’s never held office,” said local resident Bob George. “The scary part is how many people have no faith in Inslee.”

Some Highline students feel that they would prefer Joe Biden to win the presidential election.

“I feel that if Biden wins it will really be helpful for so many different communities that are currently in danger during Trump’s presidency. Being someone in the LGBTQ community, I think I would be more respected under Biden’s presidency,” said Sarah Shumard, second-year Highline student and film major.

Da’mont Vann, who works as a chemical dependency professional and case manager in Seattle,  expressed surprise at some of the voters who supported Trump.

“I am so surprised that women and people of color are voting for Donald Trump when he is a blatant womanizer and an unethical leader that has been accused of sexual assault. He’s also in favor if discriminatory practices against people of color,” Vann said.

Other Highline students said that Donald Trump would be the smarter choice to run the country.

“Although I have opinions on Trump and question his ability to be president, he has done many things to help our economy and I think our community will be safer if Trump wins,” said Steven Nguyen, second-year Highline student and kinesiology major. “Biden plans to raise taxes on high income families, but this will affect middle and lower classes as well.”

Some Highline students are fearful of what the result of the elections will bring.

“The outcome of the election is kind of scary. If Trump wins people literally have to fight for their basic human rights and the POC and LGBTQ community members are in so much danger,” Mbugua said.

“If Trump wins, I feel that it will bring unrest and negatively affect those in the LGBTQ community and the BLM movement,” Acosta said.

“I am not quite sure how to feel about the results since we don’t know them yet. Neither one is a good choice but I’d rather have Biden than Trump,” said first-year student Sergio Chavez.

“I hope that if Biden gets elected that Trump peacefully passes down power without conflict. In the end, I hope America doesn’t go to civil war,” said local resident Eric Lottsfeldt.

“A lot of my coworkers shared with me that they’re experiencing anxiety over these results, more than in previous times,” said another local resident who asked not to be named.

She said she and her family don’t have a lot of hope in either outcome. “We don’t favor Trump because of his lack of decency as a human being, but poor Biden is so old, I don’t think he has the stamina to endure running a country,” she said.

“I would be most happy when Biden wins,” said student Tuan Pham. “It would be really unfortunate if Trump wins again as many people’s rights and policies that protect people from discrimination will repealed under his administration.”

“I believe I will be happy if Biden wins,” Michelle Delgado said. “Through the four years Trump has done nothing but spread hate around the United States. He’s also shown that he doesn’t take anything serious, not even a pandemic.”

Some people do not want to be involved in the election.

“Foremost, in my opinion the results don’t affect me because I honestly didn’t care about who wins or loses. I just don’t involve myself in politics because it could affect my personal life in an unpleasant way,” second-year Highline student Amir Husnic.

Some people got to vote for the very first time.

“This is the first time I have voted in an election,” said student Tanner Huck, “as I just turned 18 a few months ago.

“This was also the first time I paid close attention to an election and watched all the debates,” he said. “Personally, I did not have a lot riding on this election, so I would have been happy with the results either way. The main thing for me was understanding the voting process and learning how elections work.”

Whoever wins, some people are just going to be unhappy, no matter what, students said.

Students said they were surprised by how close the presidential election was.

“The thing that surprised me the most was the election was really close because all of the hate Trump has been getting, I assumed that a lot of people were not going to vote for him,” said second-year student Michael Orellena.

Orellana was not alone in her opinion.

“One thing that surprised me was how close the votes were,” said Tanner Huck. “No candidate won a state by a landslide, usually it was within 10 to 20 percent of the vote. This was surprising to me because I always thought states were skewed towards one party, but it was a lot closer than that.”

“I am very surprised to see how many votes Trump is getting,” said one Federal Way resident. “I don’t understand how the man is even competing, seeing as how everyone seems to hate him.”

Some people are worried about what will happen with our country on who is elected.

“On social media I see a lot of threats if one candidate wins over the other,” Huck said. “People talk about going on strikes or rioting if the candidate they do not want wins, however, I see this for both sides of the election. People say they will strike if Trump wins and others say they will strike if Biden wins. I think this may happen soon after the election ends, but it will calm down as time goes on.”

Some are worried that they could be hurt financially.

“The result of this election can be really critical for people with lower income and that need help when it comes to them and their families, it will also affect communities who are struggling and poor,” Orellena said.

If Biden can win, some say he is a better fit for this country.

“The result of this election can mean that Biden can be organized and focused on situations that need to be fixed and be focused on more important things,” Husnic said.

A neutral party thinks that whatever the outcome, it is a lose-lose either way.

“If Trump wins this will affect the community and country in many ways and in my opinion it will only go down from here,” one anonymous student said. “If Biden wins our country and community will still go down no matter what. So, I really think that both of them are not good for us and in the end we are just going downhill right now.”

Others expressed concern over the divisions the campaign has revealed.

“If Trump wins, there will be a lot of outrage from many people, understandably,” said one Federal Way resident. “If Joe Biden wins, I think that Trump will reject the results and refuse to leave office.”

“The most surprising thing is how divided the country is on this matter,” said another anonymous resident. “There’s no middle ground, and I’m anxious about how the country will react to the results.”