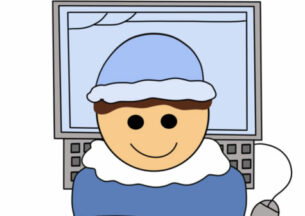 Students say they don’t mind another quarter of online classes

Students seem to not mind that Winter Quarter will continue through online learning. Some say they even prefer online compared to face-to-face.

“This wasn’t a surprise at all,” said Luis Carrera-Lara. “No one wears masks, people are still going out — clearly no one cares about following quarantine.”

With news outlets across the country reporting a “third wave” of COVID-19 cases, Winter Quarter’s fate was all but sealed.

But, while another quarter of online learning may disappoint some, Carrera-Lara doesn’t mind it at all.

“I’m really happy about it,” he said of the announcement that the quarter would be online. “Online classes are a lot easier, there’s much more flexibility.”

Carrera-Lara said that by now, in his second full quarter of online classes, he’s adapted to the format pretty well.

“The hardest thing about it is waking up at 8 a.m,” he said.

“Thank God,” said one, Calvin Beltran, after hearing the announcement.

Beltran said that ever since the switch to online was made, his grades have improved significantly.

“You can do everything online on your own time,” he said. “It’s easy to grind out more work.”

There have been some drawbacks, however, he said.

“You’re sacrificing the in-person experience, the teacher and the class being there,” Beltran said. “The environment isn’t the same. It just feels like you’re at home, you’re by yourself.”

Winter Quarter remaining online came as no surprise to Beltran.

“At the rate that we’re going through the COVID pandemic, it obviously made sense that there wouldn’t be any way we were going to be open in schools that fast,” Beltran said.

Frank Ton, another student at Highline, had a similar reaction to the news.

“I was already expecting it,” Ton said. “I maybe thought there would be some more opportunities for in-real-life classes, but I expected most of them to be online.”

Ton as well said that he feels he’s adapted to the online format by now, and has even come to favor it.

“I honestly prefer having it all online,” he said. “It just makes the whole flow of the transition between Fall and Winter Quarter easier.”

“Honestly, I’ve gotten used to online learning,” said Brian Schmitz, another Highline student. “Getting up for my Zoom classes in the morning is the norm for me now.”

“I like online learning much more than face-to-face classes,” said student Eugene Oh. “Driving to Highline and going back home is much harder than just staying at home and working on assignments through my laptop.”

Although the campus will remain closed for the quarter, many professors will still hold virtual class meetings via Zoom rather than being solely online.

Of the two formats, Ton said that he prefers classes with no virtual meetings at all.

“I see Zoom as being inefficient, and a waste of time,” Ton said. “I like online classes because most are more self-paced rather than forcing you on a schedule.”

“I’m more than OK with online learning being longer,” said another Highline student. “I have been taking online classes exclusively for a while because I don’t like doing Zoom classes.”

A problem that some students have pointed at however, is Zoom not cooperating properly during their online learning in Fall Quarter.

“I hope that Zoom will improve as time goes on,” said Caleb Choi, a new Highline student. “Since starting, I kept on having problems with the camera lagging in and out, with my audio sometimes cutting off also. Even with my brand-new computer, problems keep happening.”

Students say that they are worried that the problems with the video conferencing tool will continue to the next quarter.

And, assuming that classes remain online for the foreseeable future, Franklin Ton said he won’t miss the workload of in-person learning.

“It’s easier to manage your own time,” he said. “To be honest, this quarter has just felt much easier.”

As Spring Quarter might also be through online learning, students said they’ll be OK with that, too.

“I am fine with doing another quarter online,” said one Highline student. “We’ll be doing three quarters online with Winter Quarter. Having one more is not that big of a deal.”