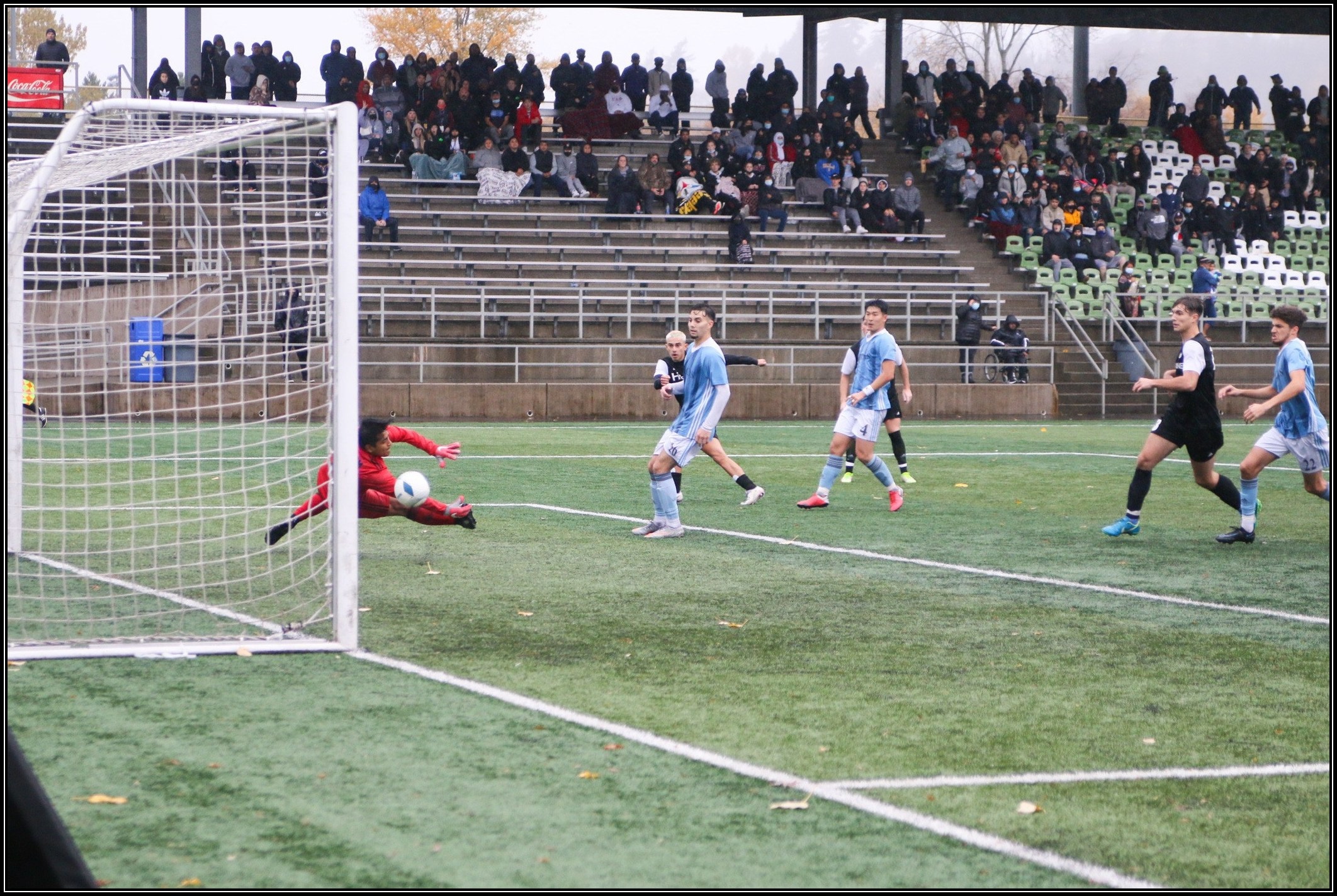 The women’s team lost in the semifinals on Friday, marking the first time since 2014 that the Lady T-Birds weren’t in the finals.

HIghline’s volleyball team saw its season come to an end with two losses in the opening rounds of the playoffs.

In the men’s final, Highline defeated Whatcom, 10-2-1, in a hard-fought match for the title.

The game was very tight throughout, with neither team ever ahead by more than a goal.

Whatcom struck first with forward Flavio Espinoza, who led the NWAC in scoring, notching the game’s first goal in the 16th minute after a Highline turnover. Highline midfielder Jesus Jeronimo immediately answered back, putting in a penalty kick 40 seconds later to tie things up.

Whatcom was flagged for five yellow cards in the game.

Whatcom forward Aldo Barajas scored a header on a free kick in the 25th minute, and forward Wyatt Lopez hit a rocket shot in the 43rd minute to take the T-Birds into half tied at 2-2.

The T-Birds took their first lead of the game in the 58th minute off a goal from centerback Kolton Lerwick. The lead did not last long though as the ball deflected off a Highline defender and set up Whatcom defender Jason Herrerra for a goal in the 63rd minute.

The two sides then went scoreless for the next 25 minutes of play.  With regulation time running out, substitute Alex Velasco controlled a header pass from Jeronimo. Velasco managed to get the shot just past goalkeeper Michael Herrera of Whatcom for the win, causing the crowd and Thunderbird sideline to erupt.

After the game, Velasco was named the NWAC tournament MVP.

The T-Birds playoff journey also included beating Clark 2-0 in the regionals, Columbia Basin 2-1 in the quarterfinals, and Rogue 3-0 in the semifinals last Friday.

The women’s soccer team ended its season after a 2-1 loss to the 13-0 Clark Penguins in the NWAC semifinals.

Highline started the game off strong, leading 1-0 early after a goal in the 12th minute by forward Andrea Guiton, off of a pass from NWAC assist leader midfielder Meredith Udovich.

“Meredith reads the field so well and will set up other players for success,” said Guiton.

Clark forward Shalece Easley scored in the 37th minute. The teams were able to hold off each other’s offensive pressure for the rest of the half, going into the break tied 1-1.

Both teams played great defense in the second half, until the 80th minute where Clark defender Sophia Green made a swift pass to forward Anna Neal down the right sideline. Neal then shot the ball just past the goalkeeper for the go-ahead goal, making the game 2-1 in Clark’s favor.

Highline could not generate offense in the last 10 minutes to send the game to overtime.

The Highline volleyball team concluded its season after two losses in the regional playoffs on Saturday.

“Kylie is always a team player and makes sure we are set up at the end of the day, her passion is strong and it shows when she plays,” said fellow middle hitter Kiani Hensley.

The Lady T-Birds were eliminated from the tournament later that day, losing 3-0 to Bellevue, 24-14, 25-23, 25-9. Highline was led by Lunday and Hensely with seven kills each, and four blocks from Hensley.

“Kiani is one of the most consistent, smart, and adaptive players I have ever played with,” said Tuchardt.

The Lady T-Birds finished 10-2 in their 2021 regular season campaign, the teams stat leaders are Lunday who led the team with 200 kills and led the entire NWAC in kill percentage with a .401. Lauren Clark led the team in assists with 780, she was also sixth in the NWAC with a 8.18 assist average per set. Vanessa Mendez led the Thunderbirds in digs with 306, as well as 29 service aces.