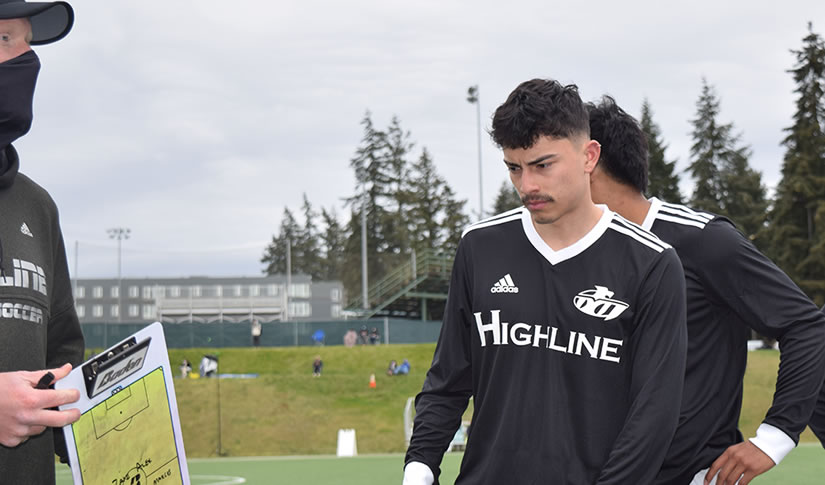 The lack of a championship did not diminish Alex Velasco’s enjoyment of the Highline men’s soccer season.

The NWAC’s leading scorer said he will back next year to try to win one, however.

“Alex is such a blessing to be around. On the field he’s setting the standard for us all…Off the field it’s nothing but smiles and good times with Alex,” said teammate Jorge Figueroa.

Velasco’s great attitude is equally matched by his skill on the field.

Velasco, who starts as a forward for the T-Birds scored nine goals this men’s soccer season, leading the league in most goals scored.

He also led the league in assists, nine, and points, 29.

Alex keeps his strategy simple, Figueroa said; he doesn’t have to do anything fancy to get by a good center back.

All he needs is the ball at his feet and he can spontaneously make it happen, said Figueroa.

Velasco’s teammates give him credit for his success but when it comes down to it, Velasco can’t help but shout out the amazing squad they had this year, he said.

“A lot of my goals came from playing with brilliant teammates that know how I play and can set me up well so my teammates played a big role in my scoring,” said Velasco.

Velasco also gives credit to his teammates as the source of his motivation.

“The lads are always supporting every minute even through my mistakes the lads were a big key force,” he said.

The team didn’t know if they would have a full season or not this year so every game was treated as a blessing, said Velasco.

The T-Birds finished first in the NWAC Western Division remaining undefeated with a record of 5-0-1.

The men’s soccer team was the only team in the league to play without a loss and was the highest scoring team in the lead, averaging 4.83 goals a game.

Throughout their season the Thunderbirds netted 29 goals while goalie Sam Prusynski allowed only six goals.