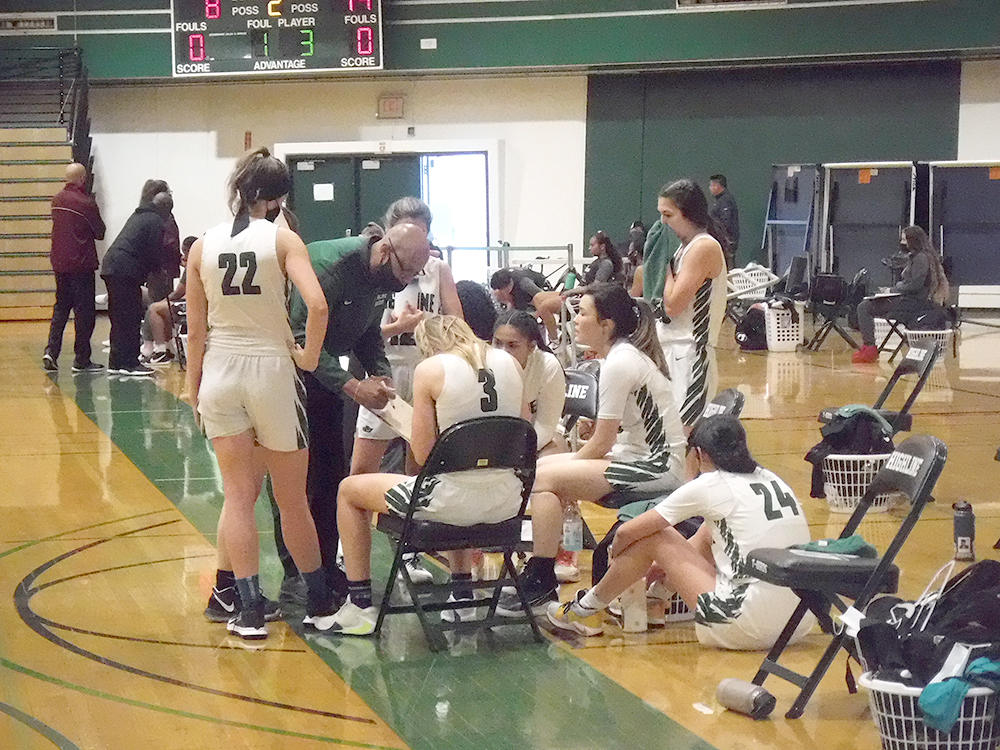 Highline’s women’s basketball team has to plan for games each week that might not be played.

Friday’s 50-43 win over Pierce meant that the Lady T-Birds had finally played more games than had been cancelled.

This is just one of the challenges in the Lady T-Birds’ COVID-shaped spring season.

This situation has not only made the season more complicated and stressful for players, but for coaches too.

“It really hasn’t affected the way to game plan, what has affected us is not really knowing if we are going to play a game due to people getting COVID,” said Head Coach Damien Crump.

The coach said he tells his players, “Work hard, be committed, be coachable, have a positive outlook.”

Although the season does not count, Coach Crump said he has a great deal of confidence that his team would go far if the season did count.

“We have a talented group, I think if the season counted we would have been in the top four, and a chance of top two in the division,” Crump said.

Crump said the team needs to work on its shooting.

“We have talented group,” he said. “We just need to improve on making easy shots, and we have had some shooting struggles lately.”

However, the team is solid at the other end of the court.

“We are a very strong defensive team,” said Coach Crump.

That was clear in the team’s most recent game, when Highline topped Pierce, 50-43. The win improved Highline’s record to 2-2.

Catherine Sunny, a sophomore point guard on the team, said there are challenges to playing and practicing under COVID conditions.

“Since the seasons have been altered, we now play after the boys basketball team. Which means no shootaround and we can’t watch film together as a team anymore,” Sunny said.

Team chemistry has been difficult to develop this year, due to the COVID restrictions.

“Guests in the dorms are only one per person, so it is not as convenient as it used to be. We really have not been able to do our own team bonding,” Sunny said.

“Your world can be flipped upside down without notice, cherish everyday life,” he said.

The Lady T-Birds played at Tacoma on May 4, with results unavailable at press time.

Highline is on the road this week and next, at Centralia Friday at 7 p.m., and at Lower Columbia Tuesday, May 11, also at 7 p.m.