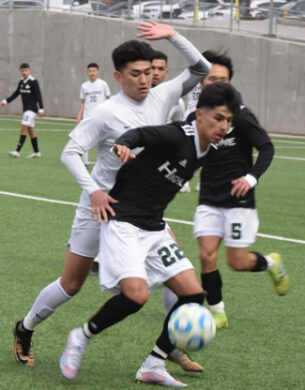 The Highline men’s soccer team opened its COVID-delayed season at Bellevue, coming away with a 4-4 tie on Friday, April 9.

The women’s team, still the most recent team to be crowned NWAC champions, split its first two games. The Lady T-Birds beat Lower Columbia 4-3 on April 6 before falling to Bellevue 3-1 on April 9.

Highline then rebounded to spank Pierce 5-0 on Tuesday, Aug. 13.

The teams were tied 3-3 at the half. Highline’s Alex Velasco opened the scoring at the eight-minute mark, with an assist by Marcos Santos.

Bellevue answered with two goals by Leandro Anaya, the first coming on a penalty kick. Highline then tied the score again, with Velasco feeding David Avila at the 15-minute mark.

In the second half, Bellevue’s Thomas Nguyen scored at 55 minutes. Highline needed an own-goal on Bellevue to salvage the tie.

For the women’s team, second-half goals from Abby Carmel and Kayla Ness gave Highline the win over the Red Devils in Longview.  Carmel had two goals, and Andrea Guiton added a goal and an assist.

Against Bellevue, the Lady T-Birds took an early lead on a goal from Guiton, assisted by Carmel. But Highline had no answer for three second-half goals from Bellevue.

Highline had eight corner kicks to Bellevue’s one, but was unable to convert.

Highline’s Kate Nelson recorded a shutout in goal against Pierce, while her teammates built a 4-0 lead in the first half.

Guiton and Myka Carr each notched a pair of goals, with Sierra Newman finished the scoring in the second half.

The T-Bird men play their next game Friday, April 16, at noon at Starfire Stadium against Tacoma.