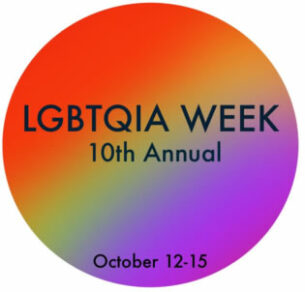 Emedi spoke on “The Queering of Authenticity” via Zoom on Oct. 14, as part of the Highline’s 10th annual LGTBQIA Week.

In challenging typical binary norms like gay or straight and male or female, Emedi spoke of her personal experience expressing her queerness through her last name and gender, while also having to repeatedly come out. She did this while encouraging attendees to challenge and recognize overarching binaries in institutions and other aspects of their lives.

“I recognize that a lot of you welcome me into your home, and that’s an incredibly intimate space for someone you just met so I’m very grateful,” Emedi said in regards to presenting over Zoom.

Emedi was born and raised in the Olympia area (“on Nisqually land,” she said) and is an elementary teacher of seven years, currently teaching at Hazel Valley Elementary in Burien. Along with being a teacher, she is also currently working toward becoming an assistant principal.

Emedi began to confront binaries with the pronunciation of her last name. She spoke of difficulties in adhering to one pronunciation due to her diverse background.

“My mom has two skin colors, white and red. … She’s an incredible white woman. She told me my name was Tamsha Emedi (ee-mee-dee),” Emedi said.

Emedi grew up her whole life thinking that’s how her name was pronounced, up until her father came back into her life in middle school.

“My dad got back into my life and was like, ‘This is us and our family, and our last name is Emedi (eh-meh-dee)’,” Emedi said.

Emedi said while that pronunciation did make more sense to her, that’s not how she grew up and given she didn’t know her father’s family “like that,” she would stick with Emedi (ee-mee-dee).

However after her father remarried and had children who were her new siblings, they too took on the last name of Emedi, pronouncing it as her father did.

After growing up and learning more, Emedi came to the realization that the pronunciation of her last name was “whitewashed.”

Emedi reflected on her upbringing as to how her mother chose to pronounce her last name and how her mother always “showed up and showed out,” which made Emedi really proud of her.

“One of the many reasons I’m so great, is because she was great. So actually I do like Emedi (ee-mee-dee), I use both and I think both are fine,” Emedi said.

Emedi was able to use her experience with her last name as an example for situations in which individuals can/do not conform to binaries, in this case it was something as simple as her last name. Emedi’s example allowed attendees to witness how one can authentically introduce themselves with a story in which they don’t appeal to a binary.

Breakout rooms were created for attendees to introduce themselves and to share on how they’ve struggled with appealing to binaries.

After breakout rooms, Emedi shared her experience in coming out to her mother. Repeated sleepovers at a friend’s house on Saturdays allowed for Emedi to develop beliefs of her own. Beliefs that she found herself practicing more on Sunday than Saturday.

“She kept inviting me over on Saturday nights so I’d happen to wake up at her house on Sunday mornings. Some of you who maybe have had similar backgrounds might start to pickup where the direction of this story is going,” Emedi said.

“So I would go over on Saturday and she’d bring me to church on Sunday. There was this special place where only kids would go and there was games and ice cream, and then a little bit about Jesus, but then more games. Church was fun so I suddenly found myself becoming a Christian,” Emedi said.

Emedi felt it was time to come out to her mother, about Jesus however.

“Mom, I have something really important to say to you. I wanted to tell you, I’ve accepted Jesus Christ as my lord and savior into my heart,” Emedi said.

“And she goes, ‘What? You’re not gay?’ and I say no, of course not. I like the boys, I’m just here to let you know that I’m a Christian and I wanted you to know that,” Emedi said.

Emedi’s mother expressed distaste for the sleepovers, but supported Emedi’s choice in faith and was expecting Emedi to come to terms with her sexuality. Turns out, her mother was right.

Emedi showed a family picture of herself and six siblings each lined up and carrying a younger sibling lying across all of them.

“Coming out to them was pretty easy. We have a pretty tight relationship,” Emedi said.

“With the younger three kids, it was different. They were all born when I was in high school so I didn’t go up and visit as much. … They’re really connected with their mom and their mom is definitely homophobic,” Emedi said.

Coming out to that side of the family was difficult and challenging, changing their relationship yet incredibly freeing, Emedi said.

Emedi shared on screen two photos, one with herself in between two boys as they hugged and another of herself and the same boys in suite and ties.

“This was one of my very first heteronormative stereotypically gay stereotypes which was that ‘Oh, she’s gay. She must be more like a boy and hung out with boys as a kid’ because queerness is often still viewed through the lens of heteronormativity,” Emedi said.

“I’m a girl but I did boy things, I liked to hang out with boys at recess and these boys were my best friends and still are some of my best friends. When I came out to them it was such chill vibes, it was all very cool,” Emedi said.

Of those close friends, one eventually got married and had asked Emedi to be a groomsman for the wedding. Emedi let out a short audible yell in disapproval.

“I’m not a dude though, my queer identity is all in my sexuality. My gender is super cis, I’m super cis because that’s what it is, it’s binary. You’re either cis or you’re trans, I’m cis,” Emedi said.

“Cis,” is short for cisgender, meaning that one’s gender identity aligns with their birth sex.

This opportunity allowed for Emedi to reflect on the fact that she doesn’t even really like wearing dresses, and was actually looking forward to one of her best friends getting married.

“I did it and it was the best feeling I had ever had,” Emedi said.

Emedi shared that the experience of breaking away from her traditional gender roles with her friends in the wedding allowed for her to understand herself more and to better understand her gender expression through a queer lens.

She expressed difficulty in presenting her queer identity at work, prompting the question of what it means to be authentically out, especially since she worked with fifth graders.

“Coming out at school was different because I didn’t know how to talk about my queer identity outside of the heteronormative idea of relationships. … If I’m going to talk about my sexuality, it’s not appropriate for me to talk to fifth graders like ‘Yo let me tell you about this hot date I had the other night, with a lady’ — that’s not how I’m going to talk to 10-year-olds,” Emedi said.

In explaining how her queer identity came to fruition, Emedi had attendees reimagine systems and institutions as out, queer places — queer in the sense of not appealing to binaries of any kind.

Emedi explained that even in queer spaces that are meant to be inclusive, there are colonial mindsets that have further divided and excluded due to creating boundaries and binaries.

“That definitely happens in straight spaces, definitely in white spaces, but I’m also talking about spaces that call themselves queer but drop the T in LGBTQ+. We can have colonial mindsets in queer spaces,” Emedi said.

“When in your mind you drop the plus in LGBTQ+, you’ve created a binary because you’re saying, ‘These ones are queers, and these ones are not,’ this is the binary. Our systems have to be truly queer, no binary, always the plus queer,” Emedi said.

Emedi then encouraged attendees to make note of how binaries are present in not only social and justice systems, but our political institutions as well.

“Everybody’s queer. Everything’s queer. Not to say that everybody’s gay, but the truth, the capital T truth, is non-binary,” Emedi said.

“You, as a queer person, you are necessary for the liberation of all people,” Emedi said. “You are one of the many blueprints for how to bring about true liberation for this openness of queerness.”