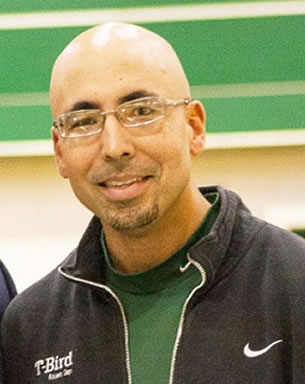 After guiding the T-Bird men’s basketball team this past season to a 7-7 record in league play which culminated in an NWAC playoff berth, Head Coach Che Dawson thinks his team can build off last season and be even better this year.

With that said, Coach Dawson is very optimistic about the recruits that he has been able to bring into the program so far.

“We are as talented as we have been in a few years,” he said. “If these guys will defend, play hard and play together, we can compete at a high level.”

However, because of the ongoing COVID-19 crisis, recruiting has been hit hard. Fortunately for Coach Dawson, he was able to bring in a few players before social distancing came into play.

“I was able to squeeze in a couple of campus visits before campus closed,” he said. “Since then, it has been all virtual. It’s different not being able to get a feel for the recruits in person, but everyone is having to deal with the same dynamic.”

Of all of the recruits so far, only two of them have come from out of state. The rest of the recruits are local guys who come from various parts of Washington including Seattle, Tacoma, Spanaway, and Des Moines.

“We have signed nine players,” Coach Dawson said. “We just lost one to a national junior college. We are still recruiting, but limiting what we are looking for now to guys who will be impact players right away.”

One of the factors that have held back the Thunderbirds at times the last few seasons have been a lack of size.

During this recruiting period, Coach Dawson has brought on five players 6-feet-7-inches or taller.

Another element that the T-Birds have lacked in the last couple of seasons have been speed and quickness on the wings.

“We tried to get quicker on the perimeter and have more guys with length who can get some things done inside and out,” Coach Dawson said about one of the things that he and the coaching staff were looking for potential signees. “We think we have been able to go in that direction.”

Having already won three division titles, one NWAC championship, making three Final Four and seven Elite Eight appearances in his 16 seasons at the helm, Coach Dawson is just as excited in what is going to be his 17th season.

“I’m very excited,” Coach Dawson said. “They are talented, good character kids who will fit into our culture.”