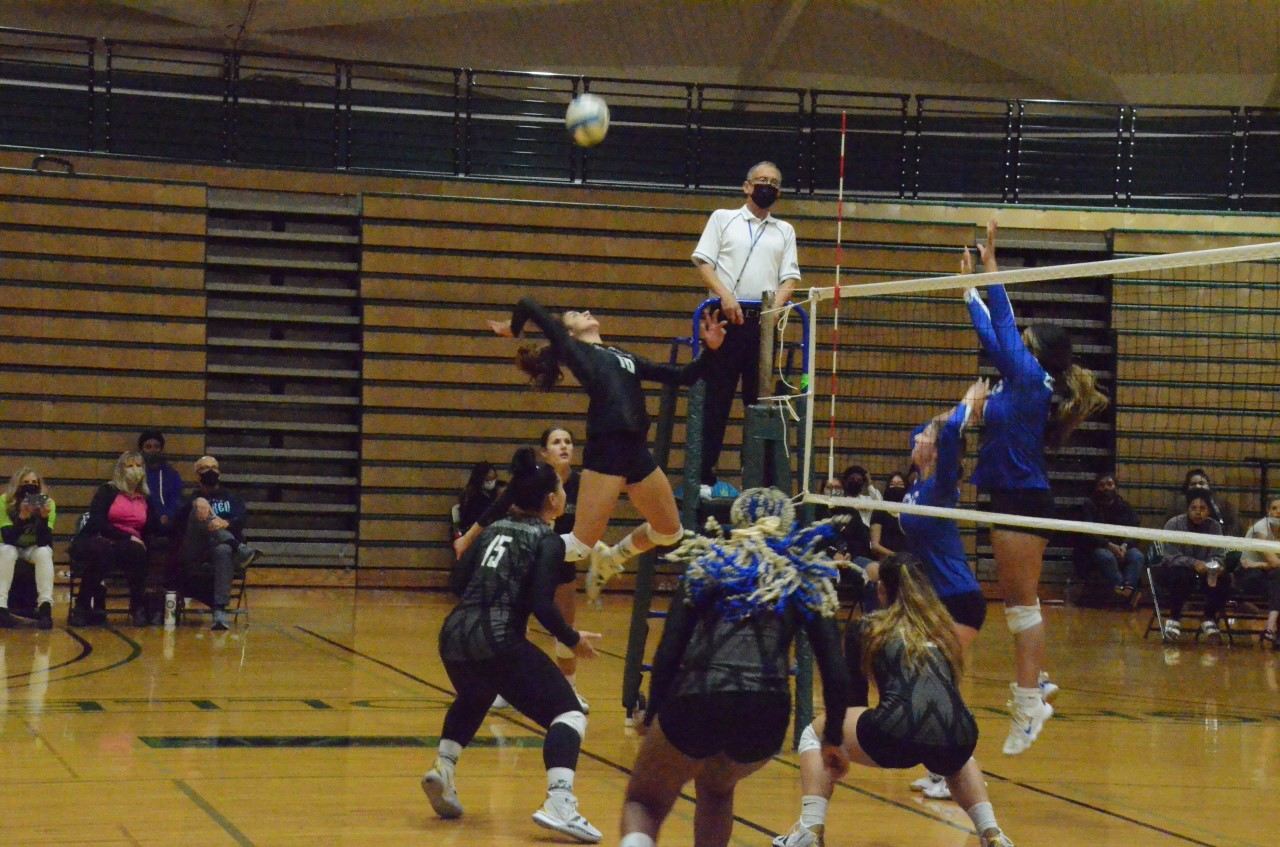 Highline’s Rebecca Zenger flies high for a shot in a recent match against South Puget Sound.

The Highline men’s and women’s soccer teams kept hold on first place in their divisions as the end of the regular season approaches.

With this win they remain two points ahead of Tacoma for the top spot in the NWAC West, at 5-3, 7-3 overall.

“We aren’t surprised because our team is capable of a lot more and one of our season goals is coming in first, so we are playing how we expected to,” said forward Alex Velasco.

“When we play as a team and work with each other on and of the ball, I believe there is no team in the NWAC that can compete with us,” said Velasco.

The T-Birds hosted the 2-4-2 Bellevue Bulldogs at Starfire on Wednesday, with results unavailable at press time.

The women’s soccer team comfortably remains on top of the NWAC West standings at 6-0-1 and 8-0-1 overall. The T-Birds went on the road and defeated Pierce 3-0 as they now head into a bye.

“I think our team’s focus this week is to kick it into high gear and work extra hard. Since we don’t have a game this week we want to make sure we are healthy and prepared by having more practices,” said forward Andrea Guiton.

This game also had a very balanced scoring effort, with one goal each for defender Alexandra Reed, midfielder Teofilo, and forward Myka Carr. All goals were assisted by Meredith Udovich, who leads the NWAC in assists with 13 on the season.

“When Meredith is on the field, you just know she is going to make an impact. She is one of the most unselfish girls on the team,” said Guiton.

The next match for the Lady T-Birds will be at noon Saturday, Oct 16. They will be on the road against the 2-3-1 Tacoma Titans.

“We are looking forward to playing Tacoma and seeing how much we have improved since the last time we faced them,” said Guiton.

The volleyball team lost 3-1 against Pierce last Friday, placing them at a tie with Lower Columbia for second in the NWAC West. Highline won the first the first match 25-21, but Pierce came back to take the next three sets, 25-15, 25-19 and 25-20.

Rebecca Zenger had a phenomenal game, leading the team in kills with 14 and total attempts with 38. Last week’s NWAC player of the week Bethany Tuchardt also pitched in double digit kills with 10.

The Lady T-Birds were also hosted by 4-1 Lower Columbia on Wednesday Oct. 13., in an important match to settle the second place tie breaker, with results unavailable at press time.

“The players hit the ball well off the tee and in the fairways. They struggled on a tough course that was hilly and cold for the two days,” said Head Coach Steve Turcotte.

The Lady T-Birds will participate in the NWAC Invitational in Yakima on Oct. 17-18, their last tournament for the fall season.

“We will be working on chipping and putting. We also need to gain strokes back around the greens,” said Coach Turcotte.