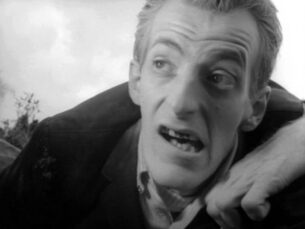 The first zombie to ever be shown in George Romero’s Dead Trilogy, played by the late Bill Hinzman.

The late George A. Romero’s “Dead Trilogy” is one of those rare families of films where all three movies are great.

The “Dead Trilogy” are three zombie films written and directed by the grandfather of the modern zombie movie himself, George A. Romero.

Each film came out a decade apart and focused on the human drama, and less on the zombies.

The films are all criticisms of modern society, though each film critiques different parts of modern life.

The first film, Night of the Living Dead (1968), broke new ground when it was released. That was due to the darker tone and the zombies themselves.

The film follows a group of survivors holding out in a farmhouse while the living dead roam outside, trying to consume and infect any non-infected they see.

The group consists of Ben (Duane Jones), the main character and head of this ragtag group; Barbara (Judith O’Dea), a woman who’s gone catatonic after being attacked by a zombie; a young couple, Tom (Keith Wayne) and Judy (Judith Ridley); and a family consisting of Harry (Karl Hardmen) and Helen Cooper (Marilyn Eastman), along with their sick daughter Karen (Kyra Schon).

The film is primarily a critique of how during an actual crisis, people would much rather fight amongst themselves than actually solve the problem at hand.

The point is driven home by Ben and Harry’s constant arguing about where it’s best to hold out from the zombie horde outside.

Ben thinks their best option is the first floor of the house while reinforcing the windows and doors. That way they can see what the zombies are doing, and they have plenty of escape routes.

Harry, conversely, thinks they should head down into the basement, because it’s more secure and they only need to guard one door.

What’s great about the conflict between the two is that both points have merits and drawbacks.

The criticism is also shown by the fact that zombies aren’t necessarily the biggest threat that the group has to face.

The film avoids the mistake that a lot of zombie media makes, that is making the zombies as the big issue that people must contend with.

Throughout the film the ghouls are more of a backdrop to the human drama that the survivors are having.

Another point of social commentary that people latched onto was having a black man as the lead and having him constantly fight with a more antagonistic white man. Keep in mind, the film was released in 1968, although Romero stated numerous times that tapping into the race issues America was facing at the time was not his intent.

Ben was initially written as white man, but Romero hired Duane Jones because he simply gave the best performance.

However, Romero had stated that he did see where people were coming from, and that, while on accident, it was an unavoidable part of the film.

Despite the film being a classic, it still has its faults.

The film starts out with Barbara as the main lead, but after the zombie attack she becomes catatonic, and Ben becomes the lead.

The problem is that throughout the rest of the film, Barbara doesn’t do anything of value, making the audience wonder why she’s even there in the first place.

Even though the creators made no money because of a copyright blunder by the studio, Night of the Living Dead was a huge success, and changed horror cinema forever.

Ten years later Romero had to prove to everyone that he wasn’t just a flash in the pan. So he set out to make another zombie movie just as good as his first film.

To get funding he teamed up with a well known Italian horror director, Dario Argento. Argento was to invest in the project and have international distribution rights, while Romero would still be allowed to keep his vision intact.

This team up of legendary horror creatures led to the creation of  Dawn of the Dead (1978).

Dawn of the Dead is one of the few sequels that’s not just as good as the original, but in some ways even better.

The main cast in Dawn of the Dead is just as memorable and likeable as the first film.

The female lead in this film is much better handled than in the first film. While Francine is next to useless near the beginning, throughout the film however, she becomes more useful and confident, making for a much more interesting character.

The relationship between her and Stephen is also very realistic. There are moments where he feels like his wife is embarrassing him in front of the other guys. While this leads to some tension in the relationship, at no point does it feel like they don’t love each other.

The two swat members, Peter and Roger, work very well off each other and convincing comradery. Throughout the film they joke with each other, have each other’s back, and sometimes are even blunt with each other.

The special effects have taken noticeable upgrades, most noticeably the gore.

The first film didn’t have much in the way of gore because of budget constraints. In Dawn, the gore is on full display, but it’s not realistic enough to make the audience turn away in disgust.

This was all done by the legendary makeup effects master and frequent Romero collaborator, Tom Savini.

The film also adds in drops of comedy throughout the film, whether it’s the survivors just screwing around the mall doing whatever they want, or a biker gang throwing pies in zombies’  faces.

But it wouldn’t be a Romero film if there wasn’t any social commentary.

There are two big points of social commentary: the breakdown of trust in the government from minorities, and America’s excessive need for consumerism.

The second point comes up when Francine asks why the zombies are returning to the mall, with Stephen saying that it’s “some kind of instinct.”

Essentially, George A. Romero just compared mall shoppers to zombies, just rambling about, and doing nothing but consume what’s in front of them.

The film still isn’t perfect, however. While the zombie gore still looks great, the zombies themselves are unconvincing.They look like regular people spray painted gray.

The tone can also be all over the place. The film goes from realistic horror with chaos erupting everywhere, to slapstick humor. While most of the time, it sticks the landing, near the end it starts to stumble.

Still, the film is worth a watch today, if you can find it. Due to conflicts with producer Richard P. Rubenstein not being able to find a studio to shell out money for a home movie 3D conversion of the film, he made it deliberately difficult to watch the original film in America. You can’t find the film on any movie streaming service.

The easiest way is to watch it on YouTube. But, if a person wants to watch the film without the internet, prepare to pay a premium, as the only way to buy physical copies is an international version, which by default is more expensive.

Another thing to watch out for is which version you watch. There’s the theatrical version which was the film released in the U.S. theaters, a director’s cut with scenes that were left on the cutting room floor and previously seen scenes simply extended, and Dario Argento’s cut, also known as the European cut, which was released in Italy under the title ZOMBI.  The main difference in this version is that it removes a lot of the comedic scenes in order to emphasize the horror.

One last thing to watch out for is that you don’t confuse the 1978 original with the 2004 remake that was directed by Zack Snyder.

After Dawn of the Dead was a smash hit, Romero proved everyone that he wasn’t just a flash in the pan.

After some disputes with his studio, United Film Distribution Company, Romero agreed to cut his budget in half. And in return Romero kept creative control.

This all came together when in 1985 the third film in the trilogy was released, Day of the Dead.

The film takes place several years into the zombie outbreak. Inside a military bunker things are starting to get heated, as no one can agree on what to do with zombies.

A small group of scientists who are supposed to be led by Dr. Logan (Richard Liberty), who’s called “Frankenstein” throughout the film. But they are really being led by another scientist, Sarah (Lori Cardille).

The second faction is a contingent of soldiers set to guard the scientists, led by Colonel Rhodes (Joseph Pilato).

The movie, unlike Dawn of the Dead, doesn’t have a lot of zombies. The film features a lot of talking, which can be a huge let down.

However, even though there’s no zombies throughout a lot of the film, that doesn’t mean there’s no conflict. Col. Rhodes is the main antagonist throughout large segments of the film. He’s insane, threatening to shoot anyone who doesn’t follow his orders.

This puts him in conflict with the scientists, seeing how they’re technically in charge, as the military is supposed to be there to protect them, not boss them around.

The late Joseph Piloto nails it as Rhodes, a person who the audience loves to hate, while at the same time being endlessly entertaining whenever he’s on screen.

Another thing that makes this movie such a fun watch is, Bub the zombie (Sherman Howard).

Bub is a zombie that Frankenstein somehow managed to tame. His inclusion brings up a lot of very interesting questions — do zombies have souls? Can they be retrained to not attack humans?

Bub wouldn’t be nearly as memorable if it wasn’t for the expert acting from Sherman Howard. Howard does a great job portraying Bub’s childlike curiosity and likeability, while at the same time, be intimidating and off-putting when called for.

The zombies, whenever they’re on screen, look much better than those in the previous films. No longer do they look like regular people just painted gray. Now, they look like actual walking corpses.

The film’s main message is that most conflicts only get worse because people refuse to properly communicate with each other.

Throughout the film Rhodes is barking out orders, and demanding results from the scientists.

While the scientists are trying to explain to him that research takes time and that he needs to allow them to do their jobs.

George Romeo’s “Dead Trilogy” are still great zombie flicks that anyone can watch during Halloween.