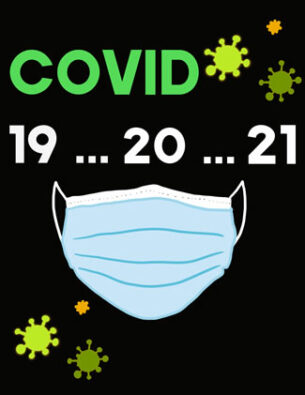 Highline community looks back on pandemic one year later

When shutdowns began last March and schools across the country pivoted to remote learning, Highline’s Vice President for Academic Affairs Dr. Emily Lardner didn’t imagine the pandemic would still be around a year later.

“I never expected that,” she said. “I heard people say it could take this long and I just discounted that.”

She wasn’t alone. Many others have said they also thought the pandemic would only last a few weeks or months. But maybe that was good, she said.

“It would’ve been too overwhelming to know what we know now last March,” said Dr. Lardner, “if it felt not like an emergency but a change in the status quo forever.”

After Gov. Jay Inslee made his initial announcement that schools had to close for six weeks, Highline President Dr. John Mosby quickly told students that learning would be conducted remotely for the rest of Winter Quarter and the start of Spring Quarter. Shortly after, he said the entirety of Spring Quarter would be online.

Dr. Lardner said she has learned a lot.

“I feel like I have a much different perspective,” she said. “I really don’t even have words for how much learning had to go on and how much energy that cost people. It’s so much change.”

The pandemic has also put past hardships in perspective, Dr. Lardner said.

“My first fall at Highline, we were getting ready to move out of those office buildings into the new building and it felt incredibly challenging,” she said. “We had issues with shredders that felt all-consuming and now I think, ‘We had no clue how complicated things could become and how quickly.’”

And in reflecting on how COVID-19 has changed the ways people communicate and interact with one another, Dr. Lardner said she is newly recognizant of all the intricate ways humans connect.

“We’re such complex communication beings that to only be able to communicate through a Zoom is weird,” she said. “I’ve become really respectful of how much we can do remotely so people don’t have to be commuting, but also deeply appreciative of human communication when we’re in the same space.”

This is something she said she didn’t fully understand until it was gone.

In reflecting on how Highline officials handled the abrupt switch from in-person learning, Dr. Lardner said she thinks they did the best they could.

“I think what we did right is to say, ‘Teachers need a lot of support,’” she said. Making the decision to delay Spring Quarter by a week allowed teachers more time to prepare.

Looking back now, Dr. Lardner said she’s not sure what she would do differently, if given the chance. However, she does want to know how Highline can be better moving forward.

“While I wouldn’t want to go back to last March, I would love for us to sit down and talk about what we learned, to document it, so we would know better,” she said. Taking the time to talk with students, staff, and faculty about what went well, what didn’t, and what college officials should keep in mind moving forward, is important.

Dr. Lardner said she anticipates that we will come to understand more about the last year as time passes and further research is done.

“People are going to study this and tell us what we learned,” she said. “And I’m very curious to know what they find.”

Entering into this uncharted territory last March, he said it was hard to know just what action to take without the past experience to look back on.

“I don’t think anyone knew what to expect when this started or how long we would be affected by it,” Pham said. “It [wasn’t] like any other event where you can review lessons learned from other institutions who have experienced it.”

But despite the lack of precedent, Pham said he’s proud of how the college has managed to adapt and that there have been valuable lessons learned from the experience of the past year.

“I believe we have done our very best given the circumstances and the unknown nature of the pandemic,” he said. “It has changed the way we look at education — hybrid, online technology — and [shown] that some components could be more readily used in the future.”

That future may be approaching very soon: In an email to students on Tuesday, President Mosby announced the college’s plans to return to campus for Fall Quarter.

“It is hard to believe that it has been one year since the college switched to remote learning,” Dr. Mosby said in the email. “I want you to know we’re actively planning and preparing for a phased return to in-person academics and services beginning in Fall Quarter 2021.”

With the announcement, some students are hopeful at the prospect of resuming in-person classes after a year away from campus.

“I think it is a good starting point and will allow people the control over their education that we all have been lacking this past year,” said Highline student Sarah Larson. “I know I miss being on campus.”

Frank Ton, another student, said a partial return to campus would provide the much-needed opportunity for human-to-human interaction, if socially-distanced.

“Not having interaction for the past year has been pretty depressing,” Ton said. “It’s been rough — I’d rather get back to school and have some social interaction.”

Other students are more concerned: Nehha Hussain said the move might be too soon.

“It’s not a bad idea but not all of us are comfortable with coming back,” Hussain said. “I think that it’s best to let everyone get vaccinated before going back so we are able to prevent another mass infection.”