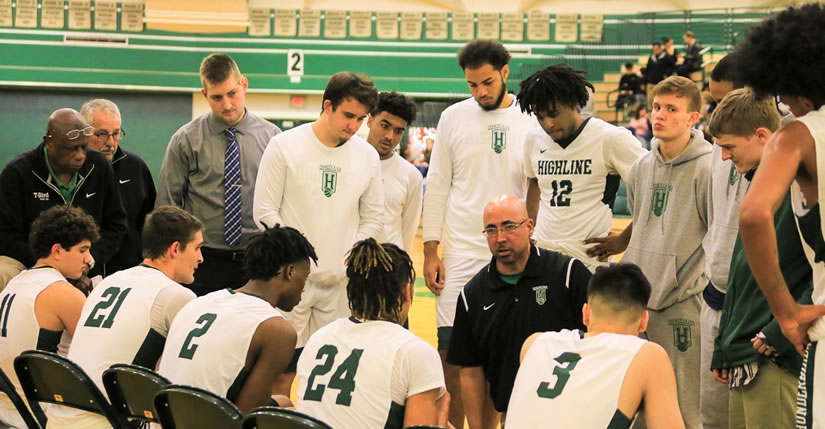 Head Coach Che Dawson talks to his team during a game last season.

Highline’s men’s basketball team, in any normal year, would be gearing up for the playoffs around this time of year. Everyone is well aware by now that this is not a normal year.

Due to delays caused by the ongoing public health crisis, the basketball team will play the first game of their regular season in the springtime, on April 2 at Centralia.

Highline made the playoffs last year after going 15-13 overall, 7-7 in conference, but the NWAC tournament was cancelled due to the pandemic.

Head Coach Che Dawson said that he always associated the warm weather and sunshine with the conclusion of the basketball season and was initially concerned with how it may impact his team.

“Everything feels strange,” said Dawson. “When you have been doing this a long time, the annual cycle becomes subconscious. This time of year always feels like post season tournament time. The days get longer. The weather is warmer.”

“It is odd starting right now. There is also the challenge of the guys being very out of shape. They’ve been working hard to get back in shape,” he said.

Dawson said that throughout the age of the pandemic, it has been especially difficult to prepare and plan ahead for regular season games.

“The uncertainty is the most difficult thing. We started having workouts in the fall thinking we would play in January,” he said. “Then things shut down and postponed again. Now we are preparing for our spring season, but things could change on a moment’s notice. It’s also been difficult to bond as a team. But everyone is dealing with the same thing.”

Everyone dealing with the same thing at the same time has prompted a universal togetherness as the last several months have dragged by, something that to Dawson’s surprise, has manifested a culture of selfless basketball among his team.

“So far what we have seen is really unselfish play,” said Dawson. “That’s odd considering the lack of time we have been together. We should have good balance and shoot the ball well, have the necessary quickness, have the necessary length and versatility defensively.”

The 2021 squad is nearly entirely made up of freshmen. The exceptions being forwards RJ Nelson and Payton Dickerson.

Two freshman forwards are from out of state, with Luke Brower being from Utah and KeiSean Harrell hailing from the sin city, Las Vegas.

Guard Kenny Curtis led his Rainier Beach High School Vikings to a 13-2 record against the rest of the district in his senior year, and looks to keep the momentum going as he embarks on his college career.

Alongside him will be guard Bradley Graham, whose Federal Way Eagles ended last year’s season 27-7.

Highline’s first home game will be on April 9 against Grays Harbor, with tip-off time yet to be announced.