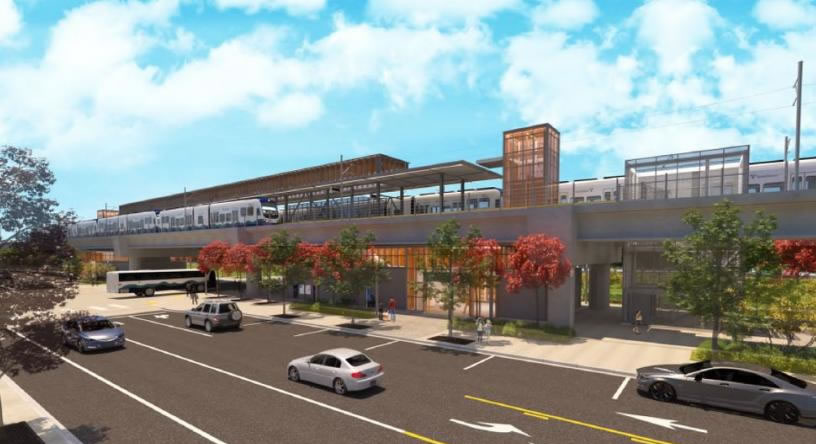 Artist’s conception of Sound Transit’s planned Highline station, which is scheduled to open in 2024.

Sound Transit’s endeavor to extend the light rail to Highline is still projected to be completed on time, even in the wake of financial hardships caused by the COVID-19 pandemic.

The Federal Way-bound project, which began in 2020 and will include a station near Highline, came to an abrupt yet short-lived halt in the early days of the ongoing global health crisis. Scott Thompson, public information officer for Sound Transit, said that the delay was not sufficient enough to derail their timeline.

Commuters in the Highline College area will not have to wait until 2024 to see changes, however. Thompson says that they have already made modifications at transit stations in the South King County area ahead of the arrival of the new line.

While Sound Transit’s woes do not come in the form of delays, they have been prevalent in the form of fiscal setbacks, obliging the Central Puget Sound Regional Transit Authority to review its plans.

“With the decrease in revenues, the Sound Transit Board of Directors is looking at how we can deliver all the projects voters approved in the Sound Transit 3 package. That process is being called realignment,” Thompson said.

Sound Transit’s economically challenged situation is caused by two concurrent issues: the “Great Lockdown” of 2020 and its subsequent recession that brutally impacted the general public’s spending and hence tax revenue; and heavily escalating prices in construction beyond the scope of the agency’s initial projection.

Currently, Sound Transit is in the second month of the Realignment project, which began at the new year. February will be focused on discussions regarding various approaches to the project after January’s financial evaluations. The entire month-to-month process should conclude in the summer of 2021, when the agency’s priorities and updated project schedule will be finalized.

While many of the agency’s future projects may see an updated timeline soon, Scott Thompson says that the Highline project is still on track to be completed on time.

“Projects currently in construction, like the Federal Way Link Extension, will not be affected by the Realignment process,” he said.