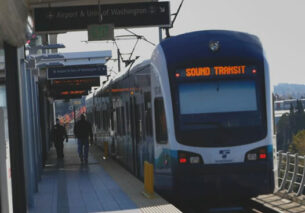 Sound Transit is in the process of extending light rail from Angle Lake south to Highline and Federal Way.
Daniel Bates/THUNDERWORD

Sound Transit is still on track to complete their Highline-bound expansion as scheduled, even in an era disrupted by the ongoing global health crisis.

The nearly 8-mile long project broke ground in early 2020, and will include stations near Highline and in Federal Way. The expansion is still expected to be completed by 2024, as the COVID-19 pandemic has caused minimal delay.

Scott Thompson, public information officer for the project, said that there was an initial interruption to make sure the crew was adhering to social distancing guidelines.

“We had a brief stoppage in work in March as we implemented the state’s COVID-19 protocols for construction projects,” Thompson said.

These protocols, such as mandatory use of face coverings and the meticulous disinfecting of surfaces, are consistent with the measures found in most worksites.

“The COVID-19 protocols include wearing a face mask or face shield, social distancing and enhanced cleaning and sanitizing for tools and equipment,” Thompson said. “Since then, we have been working full steam ahead.”

Rachelle Cunningham, PIO for Sound Transit, says that “full steam ahead” entails months upon months of clearing land of any existing structures and trees as well as moving underground powerlines and pipes out of the way of construction.

“Crews have spent months demolishing buildings, removing trees, relocating underground utilities and clearing and grading,” Cunningham said. “Some of the most significant work has been at the Midway Landfill, where 73 percent of the waste material has been excavated and replaced with clean fill material for construction of at-grade tracks.”

Time is on Sound Transit’s side; money however, is not.

As the economy continues to struggle, so does the agency’s revenue stream. Cunningham said that Sound Transit has been forced to regroup and come up with a game plan to tackle their new budget woes.

“The COVID-19 crisis is greatly reducing Sound Transit’s revenues,” Cunningham said. “In response, the agency has undertaken a realignment process to determine which projects and voter-approved timelines will need to change due to lower revenue projections, absent receiving alternative revenue.”

“With the decrease in revenues, the Sound Transit Board of Directors is looking at how we can deliver all the projects voters approved in the Sound Transit 3 package. That process is being called Realignment,” Thomson said.

“Projects currently in construction, like the Federal Way Link Extension, will not be affected by the Realignment process.”